The College of Social Work is committed to advancing the mission of The University of Tennessee, Knoxville as the state’s land-grant, flagship university, to provide a quality public education for the citizens of Tennessee through exemplary teaching, research, and service. The College of Social Work provides a professional social work education program that prepares students for social work practice and doctoral level graduate students for social work research and academia.

History of the College

The College of Social Work at the University of Tennessee, Knoxville was established in Nashville as the “Nashville School of Social Work” in 1942 in a consortium arrangement with Vanderbilt University, George Peabody College for Teachers, and Scarritt College. Those three schools were able to jointly secure a three-year grant of $40,000 from the General Education Board (one of the Rockefeller Foundations) to help fund the start of the school. Lora Lee Pederson, one of the foremost persons working to start the school, was the School’s first Director, serving from 1942-1950. Master of Science in Social Work (MSSW) degrees were awarded through Vanderbilt University from 1944 through 1951. In 1951, the school officially became a part of the University of Tennessee and from that point forward, degrees were awarded by the University of Tennessee. The school expanded to Memphis in 1951 and then opened a full-time one-year Knoxville Branch program in 1958 (a second year program was opened in Knoxville in 1968). Due to a budget crisis, the Memphis Branch was closed from 1960-1965. When the Memphis Branch reopened, it was housed on the campus of the University of Tennessee Medical School (now known at the UT Health Science Center campus).

The University of Tennessee changed the title of the School’s Director to Dean in 1973, and with the retirement of longtime Director/Dean Sue Spencer (after 23 years of service) that summer, the Office of the Dean was moved to the Knoxville campus and Ben Granger became the second dean. The first Bachelor of Science in Social Work (BSSW) degrees were awarded in 1980 and the first Doctor of Philosophy (PhD) in Social Work classes began in 1983. In 1985, the School of Social Work officially became a college, and the name was changed to the College of Social Work.

Ben Granger resigned from the dean’s position and returned to teaching and public service in 1988 and Eunice Shatz was appointed the Dean of the College. Distinguished Chancellor’s Professor Charles Glisson established the Children’s Mental Health Services Research Center in 1988 with funding from the National Institutes of Health, and particulary by the National Institute of Mental Health. Since its founding, the Center (now known as the Center for Bahavioral Health Research) has studied thousands of abused, neglected, delinquent, and emotionally troubled children and their families from across the United States.

Eunice Shatz retired in 1996 and Karen Sowers became Dean in 1997. In 2007, the College launched one of the first Online MSSW programs in the country – allowing the College to expand past the borders of the state of Tennessee for the first time and offer the MSSW degree to students throughout the country and around the world. The Memphis branch was closed in 2011 and Memphis-area students are now served by the Online MSSW Program. In 2012, the College launched an innovative Doctor of Social Work (DSW) in Clinical Practice and Leadership degree program that prepares graduates for advanced clinical practice and leadership. (The DSW Program is unique in the country in that it has an advanced clinical social work curriculum focused on evidence-based practice, clinical leadership, clinical science, and applied research.) In 2017, after 20 years of service to the College, Karen Sowers retired and after a nationwide search, Lori Messinger was named as the College’s fifth dean in 2019.

Mission, Vision, and Values of the College

Please see https://www.csw.utk.edu/strategic-plan/ for the most current Mission, Vision, and Values.

Statement on Racism, Discrimination, and Harassment

Statement on Racism, Discrimination, and Harassment

As a College of Social Work committed to the core values of our profession, we strongly reject all forms of hate speech and rhetoric that focuses on the superiority of one group over other groups. We recognize and affirm the inherent dignity and worth of ALL persons. Moreover, we are committed to challenging all forms of hate speech and other acts of racism and bigotry wherever they are found, including our own campus. More

The College of Social Work offers these academic degree programs: 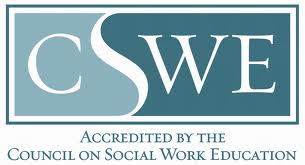 The Bachelor’s and Master’s degree programs of the UT College of Social Work are accredited by the Council on Social Work Education (CSWE). The MSSW program is the state of Tennessee’s first and oldest CSWE accredited program. Though CSWE does not accredit doctoral programs, the college’s Doctoral programs consistently receive strong, positive reviews from the University and national recognition from the National Association of Social Workers (NASW).

The offices of the Associate Dean for Academics, the Nashville and Online M.S.S.W. Program Directors, faculty, and staff of the Nashville and Online campus are located in the Polk Center at 193 Polk Avenue, Suite E. The Polk Center also houses offices and facilities of the Institute for Public Service and the Social Work Office of Research and Public Service. In addition to its full-time faculty members, the Nashville campus draws upon the research and teaching resources of 16 universities and colleges within the Nashville-Davidson County area. Students have access to the educational, cultural and social resources of Nashville and middle Tennessee. Students have access to all resources of the University of Tennessee Libraries through online access to all library catalogs and databases, instant access to e-journals and rapid inter-library loan.

The College of Social Work subscribes to the code of ethics of each of the following organizations:

Office of the Dean

Office of the Associate Dean for Academic Affairs

Office of the Associate Dean for Equity and Inclusion

Office of the Associate Dean for Research

The flagship campus of the University of Tennessee System and partner in the Tennessee Transfer Pathway.